Around the mill, the situation of grinding flour is exhibited around the 1920s / 1930s. In that period, the millers switched from grinding on the wind to grinding using a diesel engine.

More and more electrical aids were added, such as a belt-bucket elevator to transport the grain upwards or an electric bolting hutch to sieve the ground flour.

Everything about the history

After years of uncertainty, clarity has finally come about the history of this mill. Due to certain features of the mill, it was always doubtful whether the mill was of the Zaandam region. Features such as:

These are characteristics that testify to a different (South Holland) origin and not the Zaandam region. Through diligent research by mr. Bakker, editor of the magazine “Molenwereld”, discovered that the mill was originally built as a fulling mill “De Haan” in what was then Soeterwoude in the neighbourhood of the city of Leiden. The year of construction is not exactly known, but in 1631 the mill appears as a fulling mill “de Haan” on a map by Pieter van Bilderbeek.

In the golden age (1600-1700) there was a lively cloth industry in Leiden. A lot of sheep’s wool, especially from the Marino sheep from Spain, was processed and woven for this. After weaving, the fabric often received after-treatment. The purpose of the after-treatment was to make the fabric structure denser and firmer. This treatment felted the fabric, which greatly improved the quality. This process was called “fulling” and has long been a manual activity carried out by hundreds of workers. It happened in vats in which workers processed the tissue with human urine, lard and warm water. A particularly dirty and heavy work in which the fabric was kneaded and stamped for days to effect the felting. After the felting process, the fabric was washed and hung to dry.

In this time, so in the early 1600s, mill “De Haan” was built as a fulling mill. The wind force allowed the “full” to be mechanized and the stamping and kneading work was taken over by the mill. This saved about 100 workers per mill. About 25 of these mills were built around Leiden. Often commissioned by the city council, but always outside the city limits. This must have been due to odor nuisance that these activities entailed, the mills had to have a good windage and used for “fulling” a lot of water. Near the mill was a shed, which probably did not differ much from the drying shed of a paper mill. It is known that the city of Leiden sold the mill on July 25, 1663 to the “Lakenvolders” Jan Paret and Jan Cors. After several interim sales and inheritances, on August 8, 1782, the windmill came into the hands of Arnoldus Theodorus Zoodaar for the sum of 7000 guilders. 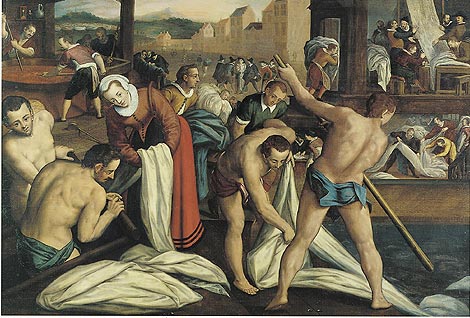 Converting a fulling mill into a sawmill is no easy task. The problem is that four of the octagonal posts get annoyingly in the way on the saw floor. After a thorough renovation of the mill, this is solved by placing a square substructure under the mill. A heavier draw-winch will also be installed and a crankshaft for the drive of a saw frame will be installed.

As an aside sawing the wood
In 1594 Cornelis Corneliszoon van Uitgeest invented the crankshaft, making from a circular movement of the mill to an up and down movement, which made it possible to saw large trees with the help of a saw frame. Before that, it was done by hand. The sawmill made it possible to make wooden ships and other structures on a large scale.

Mill sale
Zodaar died on September 16, 1800 and the mill was sold. Here too three interim sales follow until the mill is sold on April 11, 1828 to Jacob Mannekus. Mannekus from Maassluis was married in 1822 to Aletta Krook and from this marriage 13 children were born. Willem born on May 21, 1826 and his younger brother Adriaan Jacob born on January 5, 1841 will continue the wood sawing business.

The end as a sawmill
In 1864 both brothers take over the company and set up a steam sawmill to replace the mill. This is the end of the wind powered windmill “De Haan” and the windmill will go on sale. The substructure will be offered on December 15, 1865 during a public auction in the Leidse Courant. Nothing was (yet) known about the sale of the mill, which was probably demolished in early 1865. 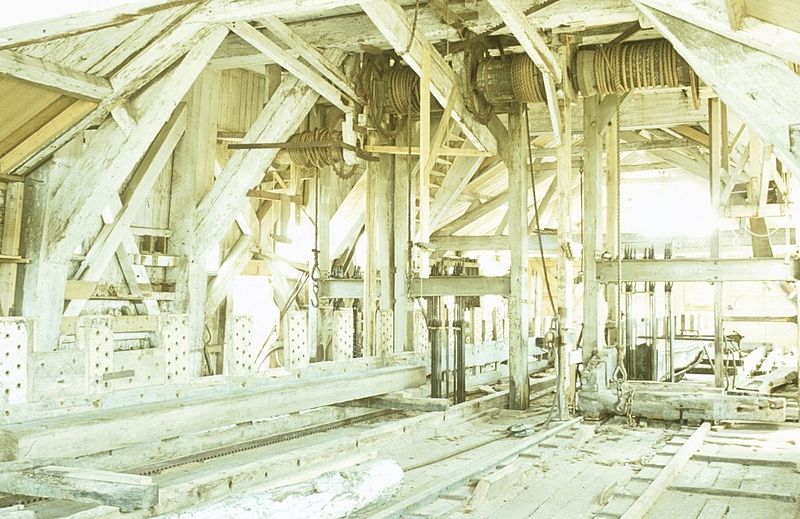 The aforementioned characteristics, control of the dimensions and the time frame have been leading in identifying the mill “De Hoop”. It has been shown with great certainty that the mill “De Hoop” started its life as a fulling mill “De Haan”.

See here for the full article about the origin of the mill “de Hoop” in “Molenwereld”.

It is certain that the mill was rebuilt in ‘t Zand in 1865 and was converted into a flour mill for grinding grain for farmers, bakers and private individuals. After rebuilding in 1865, the mill had ten different owners.

A milmaker by profession, Mr. Wilms, bought the mill in 1865 and built it with a shed and a new house. In 1866 Wilms sold the mill, house and barn to Gerrit de Vries. Gerrit does not last long and sells the mill on December 21, 1868 for 5700 guilders to Jan Spaans jr. the mayor of Barsingerhorn. Spaans rented the mill but sold it on April 14, 1874 to Adrianus Cornelis van Eck as a former tenant. Van Eck was unable to survive and went bankrupt and an auction followed on September 23, 1879 and the mill was bought by Teunis Boekel and Hildebrand Jonker for 8192 guilders. However, they quickly wanted to get rid of the mill again and sold it on May 29, 1880 for 8000 guilders to Pieter Jonker from the Zijpe, a flour miller by profession. But Pieter Jonker was also unable to keep it strong and on March 20, 1895 the mill was auctioned and Jan Stam bought the mill with buildings for 4071 guilders.

Jan Stam gave up after his wife passed away and sold in 1901 mill “de Hoop” for 7000 guilders to Arie Willem van Stralen from Schagen. Stam was therefore the first to earn on sale to the mill. But also van Stralen did not go well and the mill was auctioned again on March 19, 1906 for 5261 guilders with owner Johannes van Rijswijk a grain miller from Noord-Scharwoude.

Van Rijswijk has left it in 1908 and sells the mill for 3750 guilders to Pieter Jonker, trader in feed materials in ‘t Zand. On May 1, 1913, Jonker, the last of 10 owners, sold the mill with buildings to Arie Zeeman Jacobsz for 5000 guilders, who thus became a miller in 1 day.

The history of the mill for its owners in the first half of its existence in ‘t Zand was actually a series of weeping games for whatever reason. 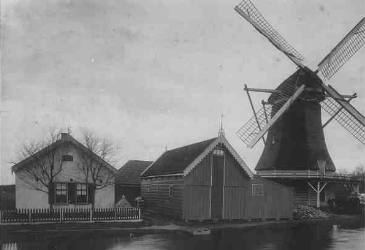 Arie Zeeman started grinding grain for farmers and bakers, soon there was also some trade in animal feed products. In the First World War, 1914-1918, the wind-powered mill certainly still had its function, but after 1918, mechanization started to come and soon electro, gas and diesel engines came on the market. These were still primitive, but Arie Zeeman and his son Nico decided to build an motor mill (1920) with two couples of stones next to the mill. The grinding with wind power was always uncertain, wind or no wind, wind in the morning and nothing in the afternoon, people wanted to work with fixed times. After the motor mill was completed in 1920, the windmill became less and less used and it was stopped quite quickly in 1922. At that time, an motor mill was the cream of the crop, you were modern and people went with the ‘time’, which was advertised. After working with wind power for hundreds of years, this was something completely new and efficient, but of course that was also true for so many other things, such as the car, the first washing machine, telephone, the light bulb, water supply, etc. etc.

Not anymore in use

The mill was no longer well maintained and fell into disrepair, at the end of the 1920s 1 blade was demolished and the running graith was dismantled. In the thirties, Arie’s son, Nico Zeeman, built simple wooden silos in the mill for the storage of various types of grain. With the outbreak of World War II, in May 1940, the cap with the last blade of the hull was demolished, the cast steel shaft was pulled down so that it broke into three parts, which was easier for transport. The wood of the cap, most oak and the wooden cogwheels ended up in the stove during the war years, eternally a shame, but that was how it was at the time. Guurtje Zeeman-Kruisveld was strongly against dismantling the mill, but could not beat her husband Nico. Nico still tried to get a contribution for the maintenance, but the municipality of Zijpe did not go further than 175 guilders (it was crisis time).

After the cap was removed, the windmill hull was fitted with a thatched-roof rain hat and it remained that way until April 2012. This roof is still next to the mill. In the first floor primitive wooden compartments were made, at the back of those compartments against the reed one could hide well, it was dark with a lot of spider silk, for the children. The first twenty-five years after the Second World War, the mill hull was still used as a silo for the animal feed company. From 1970 modern silos for the animal feed business were built and they took over the function of the mill, the wooden compartments were demolished and on the ground floor there was a simple shop for farm tools and small animal feed, the upper floors were used to store antique stuff given by farmers and individuals, which has become quite a collection over the years. 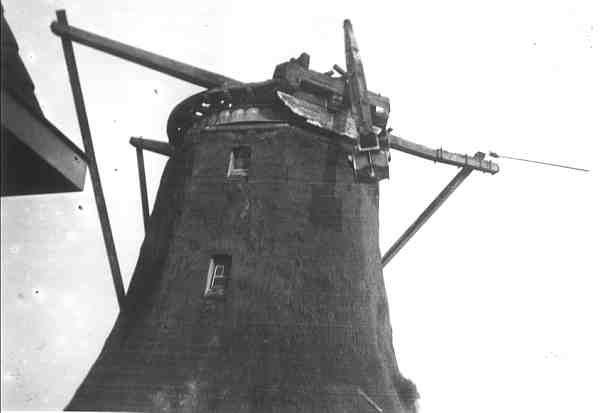 Around 2003, the Zeeman family came up with the idea to restore the mill to its former glory. A motivation for this was that on 29 April 2004 the former National Heritage Agency adopted the flour mill ‘De Hoop’ as a protected national monument (RM527656). The rating of the mill in the National Monument Register is as follows:

However, the mill body could not be restored at its original location as it had been built in by other buildings of the animal feed factory. After a number of years of preparation, Zeeman acquired a piece of land from Rijkswaterstaat to give the mill its place here. 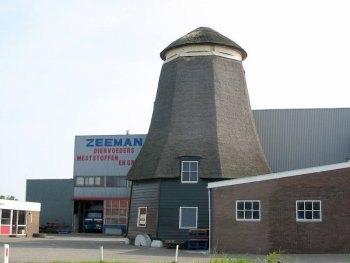 To be able to realize the restoration we were dependent on subsidies and luckily Brussels provided a large subsidy through the fund ‘Europe invests in its Countryside’, which was also the stepping stone for several subsidy providers to also support this project, of approx. 1.1 million euros. We received support from various sides from private individuals, the province of North Holland, the municipality of Zijpe and many others. The mill is housed in the foundation ‘Preservation Korenmolen Zeeman’. On May 11, 2011, the mill hull was moved by Mammoet from its old location Molenpad 10 to this location at Parallelweg 33 to be fully restored to its original state. On that day, the mill was transferred to the foundation for 1 euro. The mill was completely restored at this new location by the Poland company from Oterleek.